The Libraries of Barcelona to mark the 75th anniversary of the proclamation of the Second Spanish Republic and the 70th of the beginning of our civil war, made the project "VIVÈNCIES, la Barcelona que vaig viure (1931-1945)". We have collected the testimonies and memories of people that you were the anonymous protagonists of these facts to explain all that was not lived as the day of that time in our city, Barcelona.

Therefore, we present a virtual book, located on the website of the Libraries of Barcelona, with all documents received during 2006.

Libraries where there has been evidence collection are: 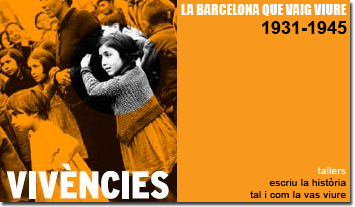